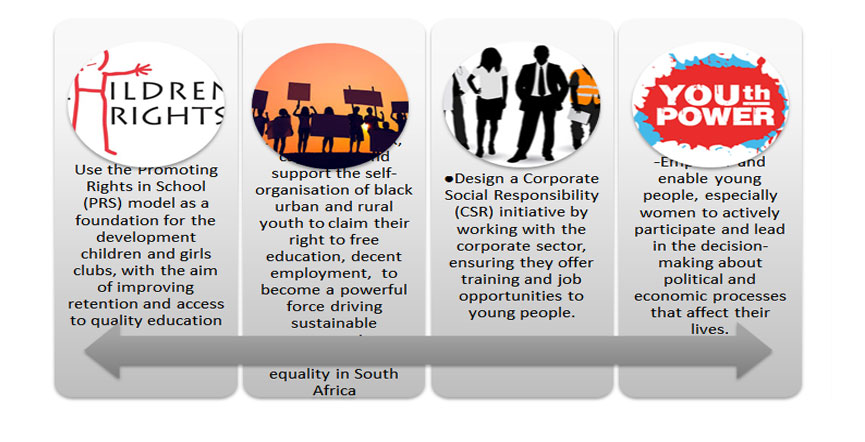 South Africa's population is largely made up of young people; those who are below the age of 35 years constitute about 66% of the total population. It is estimated that 72% of the unemployed in South Africa are young people. Almost 1.4 million young people under the age of 25, who are not students, are struggling to find jobs. Some unemployed youth have high school and even tertiary qualifications, but many have limited formal education, making it more unlikely that they will ever be able to join the formal workforce.

This exclusion and lack of opportunity often leads to social ills, such as substance abuse and crime. Young people in impoverished townships often turn to drugs, alcohol and gangsterism further perpetuating inequality and poverty. Due to existing gender inequalities and violence against womxn, young womxn continue to be the most vulnerable among youth.

South Africa’s Constitution includes a special section on the rights of the child because it recognises that many children suffered under apartheid and continue to face numerous challenges. In 2014, only 50% of South Africa’s 1.1 million pupils completed high (secondary) school. South Africa has a high dropout rate, especially amongst girls. Some of the main reasons for dropouts include child headed families; gender inequalities; teenage pregnancy; sexual violence; lack of access to sanitation, especially for menstruating girls; lack of transport and educational infrastructure; and poverty.

AASA believes that young people are the future of South Africa, and have, throughout South Africa’s history, led powerful struggles, and yet are frequently ignored when seeking solutions and often overlooked as a powerful collective to drive these solutions. As the largest and most energetic population, young people can and must be at the centre of our struggle for transformation and social justice.