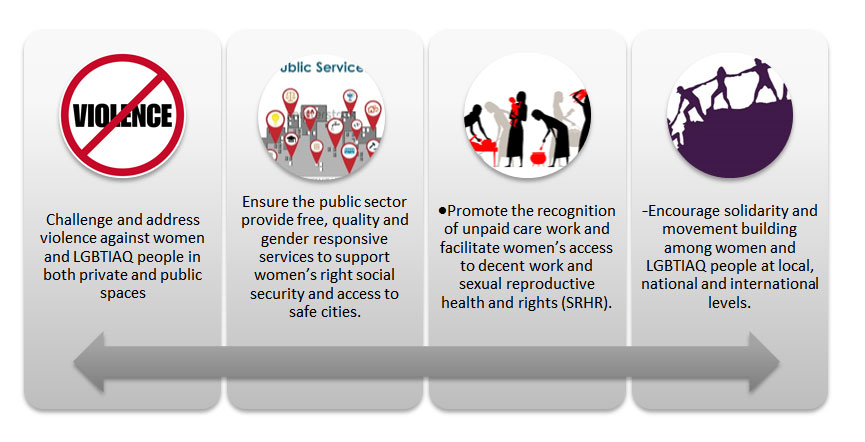 The South African Constitution affirms the democratic values of human dignity, equality and freedom, and makes a specific provision for gender equality. These constitutional commitments are further entrenched by global, regional and national commitments to promote gender equality and improve the status of womxn. To this end, the South African government adopted and ratified International Instruments such as the Convention on the Elimination of All Forms of Violence Against Womxn (CEDAW); the Beijing Platform for Action; the African Union Protocol; and the SADC Gender Protocol.

Despite the progressive Constitution and commitment to the above instruments, weak monitoring and enforcement mechanisms mean that these laws have largely failed womxn and marginalised groups. In addition, there has been little to no investment by the state and public institutions in nurturing an alternative set of non-violent, non-patriarchal societal norms and values. The experience of womxn in South Africa is also impacted by a variety of factors including race, class and sexual orientation. These, and others, intersect to create differing vulnerabilities to violence and exclusion. AASA has a commitment to working with the most vulnerable womxn, this underpins our commitment to our LGBTIAQ work and work with migrant womxn and womxn living with disabilities.

There is no national women’s movement representing the needs and interests of the poorest and most marginalised womxn. Most trade unions, organisations and community structures remain male dominated, and so there is a need to build solidarity amongst womxn in the trade union movement, unemployed womxn and womxn in the informal sector. Our goal as AASA is, as always, to identify the most marginal and vulnerable womxn, to bring our tested methodologies and theory of change to the field and to make a positive contribution to, and help to strengthen the Women’s Rights sector through our interventions across the fields of violence, economic justice, safe cities and any others that are identified throughout the strategy period.