When only coal counts: German co-responsibility for human rights in the South African coal sector 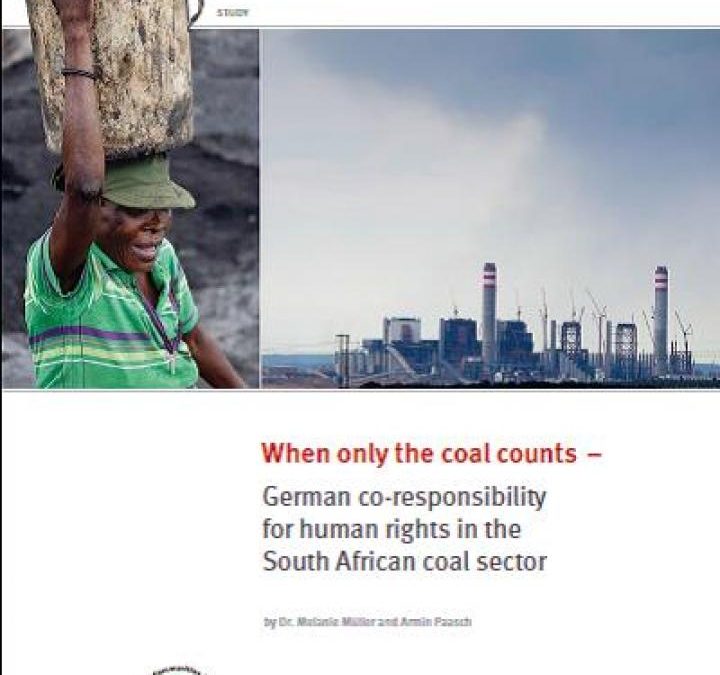 The emission of greenhouse gases from burning coal has long been recognized as one of the biggest contributors to climate change globally. South Africa obtains 90 percent of its energy from coal and ranks among-st the highest greenhouse gas emitters. The government justifies its continued investment in coal fired power plants on the grounds of needing to provide citizens with access to electricity. Many households in South Africa however still lack access to electricity while others struggle to afford the excessive costs for basic electricity.

The South African Government has recently reaffirmed the importance of addressing the country’s energy challenges, in order to stimulate economic growth and development in an environmentally friendly manner. However, it is failing to come up with a tangible plan to transform the energy sector and address the problem of energy poverty. The South African Government lacks a clear vision and strong commitment to accelerate the shift to cleaner alternative energy that is urgently needed.

This report shows that the new coal power plants of Kusile in Mpumalanga and Medupi in Limpopo – that are still under construction – pose massive threats to the environment and human rights of vulnerable and marginalized communities surrounding the plants.

The protection of human rights and the environment is one of the primary duties of every State. South Africa’s declaration and commitment to human rights manifests in its famed Constitution. The Constitution is considered a model and is one of the most progressive in the world particularly in its recognition of environmental rights. However, the examples of Kusile and Medupi show significant shortcomings in the implementation of these rights. Two decades of deregulation have perpetuated and entrenched the perverse tendency to privilege corporate interests over public goods and human rights of communities.

Environmental and social costs are externalized at the expense of these communities who pay a high price for cheap coal. German stakeholders are among those who bear considerable responsibility for this. At least 19 German companies are involved in the construction of the two power plants. Loans from the state owned KfW IPEX Bank and two export credit guarantees by the German government have contributed to the construction of the power plants. German energy companies have a clear responsibility to undertake human rights due diligence whenever they import coal from South Africa.

This study shows that neither the German government nor German companies are sufficiently complying with their human rights obligations and responsibilities. South Africa and Germany not only have to comply with human rights obligations but are also compelled to adhere to the requirements under the Paris Climate Agreement. While South Africa has taken some positive steps to promote renewable energy it continues to expand its coal mining operations and invests in new coal and nuclear power plants. Germany is considered to be a frontrunner in transforming its energy system, it nevertheless persists in promoting the export of German coal technology. This undermines energy transformation of countries abroad. While the publishers of this report welcome the partnership between Germany and South Africa it recommends that alternative renewable energy be the focus of the collaboration.