Poverty is no longer a reality for my family 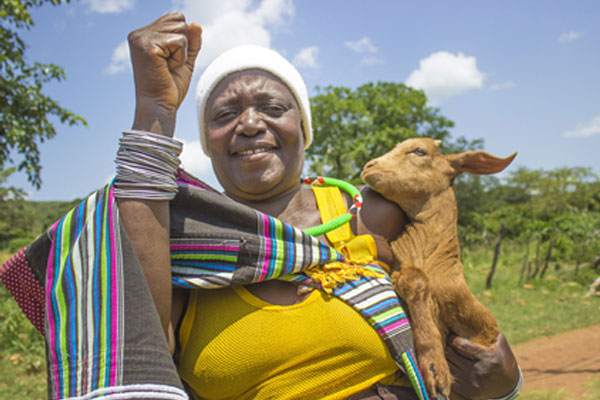 Livestock rearing like goat farming in South Africa is one of the largest agricultural sectors in this country. Along with goat farming, there is a large population of cattle (about 13.8 million) and sheep (about 28.8 million). For Mama Mashila Masindi who resides in Damani village in Limpopo, goat farming is a source of income and livelihood. Mama Masindi Mashila live in the deep rural of Limpopo with her unemployed son and her grandson who is still at school. Her son has been trying to find employment for years now, but it is very hard to find anything substantial and has been doing odd jobs with the period from the last one longer than the previous.

While in Limpopo, we decided to visit the communities assisted by AASA partners Xihlobo Xa Ndivho. We visited Mama Mashila Masindi in Damani Limpopo, who is the beneficiary of the goat farming project. Upon arrival, we found her carrying one of the three goat kids that had not gone out for grazing. When she saw us, she had a beaming smile which could lift your mood, while she looked so humble and grounded wearing her Gwana (Venda traditional attire worn by older womxn, usually married), you could tell she was very happy to see us. She then gave us chairs to sit under this big tree which was a breath of fresh air since we had been traveling in the hot sun of Venda which was at 30C°. she only had 5 goats in her kraal at the time and said the rest had gone out for grazing.

We were concerned about her kraal being by the gate leaving her goats at risk, with an illuminating smile she said in their village they struggle with jobs and access to public services, but crime is not an option with them. They prefer to work for what they have even though it is hard with no jobs and the extreme heat which harms the soil and kills vegetation and plants. She said the only issue they have is when it rains since they don’t have proper measures to keep the goats dry which leads to them being sick, and dogs that feed on the kids because they separate the old ones from the small ones.

Goats are a good choice when it comes to cattle farming if you have the correct training about the type of goats you are farming. They are multipurpose animals which you could use for milk, meat, fibre or skin production; they also require minimum care with their costs manageable compared to other cattle. When we Asked Mama Mashila Masindi how goat farming was for her she responded by saying that at first it was tricky but with time she has mastered the art of taking care of them and the business around them. She said she makes most of her purchases in December, around the Easter holidays, and when there are ceremonies within the community, be it a party, a wedding, a funeral or a ritual.

Rural life is hard enough with inadequate access to socio-economic and cultural infrastructure and services, residents have no jobs or job opportunities and the agricultural aspect they relay on is proving to be disastrous because of the environment is degrading. Now Mama Mashila Masindi has taken the role of a mother and a provider for both her son and her grandson since the passing of her daughter-in-law in 2007 which has proved to be hard to her since she is unemployed herself. Before ActionAid South Africa’s partner, Xihlobo Xa Ndivho started the goat farming project in 2017, mama Mashila Masindi and her family used to survive on her pension fund and the grandson’s grant which was never enough to meet necessities and school supplies or uniform for the grandson.

In 2016, AASA partner Xihlobo Xa Ndivho started a goat farming community project where they started training community members on goat farming, and in 2017 they started to give the six recipients goats to farm. Mama Mashila Masindi was one of the recipients and her life was to change for the better from there on. She has been farming and selling goats ever since and it has afforded her the opportunity to look after her family and cover their basic needs and school things for her grandson. To Mama Mashila Masindi, these goats are not just business, but they are a livelihood, they provide her the means to take care of her family and to make an honest living. She has formed a bond with them and takes good care of them because they take good care of her and her family.

When we asked about her motivation to start being part of this programme and doing it every day she said, “my greatest motivation is my grandson, I want to provide for him and give him everything he needs to finish school. I also want to support my grandson by growing the business and taking him to university.” This made us realize how much these projects affect those we work with and how influential they are in changing their mindsets and goals. With the help and support of our donors, we can add the number from seven families to more and help give the less fortunate opportunity to better their lives and create something meaningful with their lives.