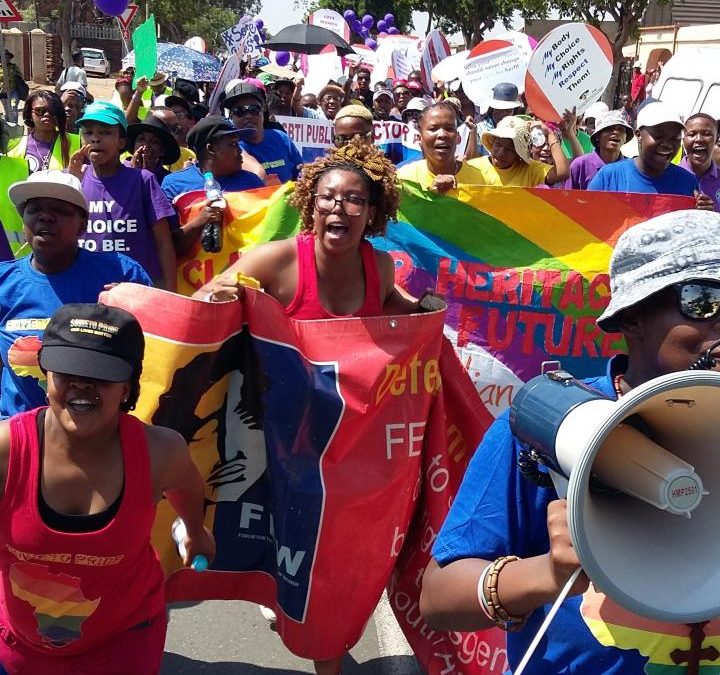 As global inequalities continue to rise, womxn often end up on the losing side. Discrimination against womxn is often rooted in economic inequality, and yet also goes far beyond. The past few years have seen the rise of a global movement against inequalities and the rise of people’s movements which are pushing back against the status quo and unequal power dynamics. In South Africa many are frustrated by the extent of government corruption and are voicing their discontent with the ruling African National Congress (ANC) as they struggle to meet expectations for building a more equal post-Apartheid society. At the global level, a new type of populist leader is emerging that is not afraid to lay blame for society’s troubles at the foot of a demonized community – immigrants, drug users, or Muslims, for example.

Change is in the air as the status quo is untenable; yet change can be elusive. The failure to implement effective regulations and redistributive measures since the global financial crisis of 2008 and the willingness of leaders to bail out rich bankers while allowing workers to suffer has meant a lot more resources for the very richest and hardly anything for everyone else. Since the crisis, the OECD has found that levels of income inequality within and between countries are the worst they’ve been in half a century. And economic discrimination against womxn is so bad that at the current rate of progress it will take 170 more years for womxn to receive pay equal to that of men. The problem of inequality is structural. Systems of governance, of finance, and of social order, are devised and maintained by those who already have wealth and power, who make the rules in order to consolidate their privilege.

However, we are seeing some change and opportunity. We’re seeing people stand together more than before. womxn in mining affected communities in South Africa have been organizing to use tools including the equality courts – set up by the constitution to achieve more balanced power and economic outcomes post-apartheid, but still under-used – to organize against the violence and discrimination that affects them on a daily basis. Students and their allies including trades unions, women’s rights groups and others in civil society have been able to build huge momentum towards their goal of ensuring universal access to quality public education through the Fees Must Fall and Rhodes Must Fall movements.

Governments and civil society groups can recognise and support these movements and their demands around access to quality public education, and public services that meet the needs of womxn. And we know how to raise the resources – tax.

To their credit, this is acknowledged by the South African government in their 2017 budget, which raises tax rates on top earners and makes a point of going after individuals and companies who use offshore entities to hide taxable income. Pressure can be maintained to ensure this is translated into sustainable spending.

More tax-funded spending on healthcare and education is closely related to lower tolerance and incidence of violence against womxn; a reduction in women’s unpaid care work; a reduction in the preference of parents to send boys to school and a greater representation of womxn in politics. It is estimated that developing countries lose an estimated R2.5 trillion (USD $200 billion) a year to tax avoidance by big companies every year. In addition, ActionAid estimates that an additional R 1.7 trillion (USD 138 billion) is given away in tax breaks to companies. In South Africa alone, an estimated R154 billion (USD 12 billion) is lost in Illicit financial flows. When public services are starved of funding, it’s womxn and girls who pay the highest price.

ActionAid’s research introduces us to the womxn patriarchy would leave behind; womxn who face intersecting inequalities who will stand with others to collectively challenge power on International Women’s Day.