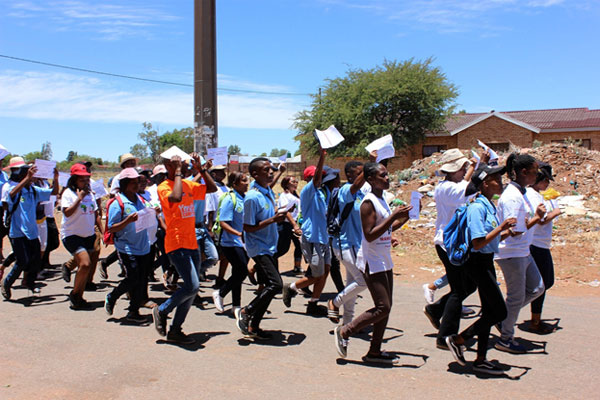 womxn have fought a hard fight to remove the shackles of the past and in their determined struggle against political and socio-economic oppression, have earned themselves a place in the history books of our great nation. The sad reality, however, is that they remain bound by the shackles of a different kind – patriarchy This has to a certain extent been passed on to the younger generation and for years we have witnessed gross womxn abuse across Africa. The trend of violence towards womxn has been unspeakable from all ages.

On the 19th of December 2018 Activista South Africa, Mining Affected Communities United in Action (MACUA) and the community of Kuruman took to the Kuruman Magistrate Court to show solidarity to the family of Keitumetse Skeffer, a 19- year- old girl who was stabbed to death by her ex-boyfriend.

Activista Kuruman held a march together WAMUA and Social Development was part of the march: the march was at aimed at raising awareness about issue’s facing young womxn in Northern cape in relation with gender-based violence.

The empowerment of womxn rights of Activista that agitated this action went further to build Solidarity with Other AA Social Movements, Activista and WAMUA as they pledged their support to each other.

This campaign also exposed vast nature of gender-based violence including intimate partner violence, sexual violence. A case of a young womxn by the name of Keitumetse Skeffer, a 19- year- old girl who was stabbed to death by her boyfriend was the Activista’s focal point. Resolution taken by a network of organisations and people in solidarity was that this case would be used as an entry point to start the work around GBV.

Efforts were made to informal, formal and Unemployed youth workers to be part of Activista and to sign and deliver the list of demands to clerk of the court in Kuruman Magistrate court. This effort went fruitless as Stake holder SAPS and other stakes holder cancelled last minute. efforts will be made to involve more stakeholders in the work going forward

On the 05th of December 2018, Activista Kuruman held a march from Mothibistad at Mothibistad region court and back. Dialogue and Picket were held on GBV. The picket overwhelmed relevant stakeholders how GBV affects the society while the dialogue tackled the informalities of issues relating to social protection, rights at work and decent working conditions; and it looked at young womxn who have small businesses and how this meant low productivity and lack of access to finances. Activista Kuruman remain on fire as they want to set increase its sphere of influence in 2019Launch of Activista in Mokopane (Limpopo District)

Activista Johannesburg is made up of young people from different communities and background, it is fused with the Rainbow Alliance (RAA) and partners with the Forum of the Empowerment of womxn (FEW). For the 16 Days of Activism (DOA) Activista Johannesburg got involved in several activities from a flash mob, to Action talks, case monitoring podcast dialogues to showing solidarity to GBV victims and their families.

RAA (Rainbow Activist Alliance) is a young black lesbian led movement. Which is aimed at advocating for LGBTIQ rights in townships.

AASA’s Women’s Rights Assistant Zandile Motsoeneng and FEW’s Jade Madingwane had a podcast dialogue about case monitoring on the 07th of December 2018. The dialogue empowered viewers about the work FEW does around seeking safety and justice for womxn and about how to monitor your case. Jade gave a detailed explanation on how victims of GBV and their families can open a case and monitor its progress Awareness was created about the work of ActionAid SA to rights holders and the video reached more than 1000 people and has over 230 views on Facebook. More viewers and interest from right holders is achieved every day.